Mikla opened in October 2005. The initial idea was to create a refined but contemporary “Istanbullu” Restaurant. Both the menu and the general feel of the restaurant reflect the Turkish-Scandinavian background of Mehmet Gürs, the Chef-Owner who pioneered the contemporary restaurant scene in Istanbul when he moved here in 1996. With its outstanding food, breathtaking view, proper service and inspiring music, Mikla was instantly voted best restaurant in Istanbul and continues to enjoy raving local and international reviews.
At the end of an extensive research and dedicated creative process, Mikla launched its visionary ‘New Anatolian Kitchen’ in 2012. In this new approach, traditional and true ‘noble’ products are treated with utmost respect while being transformed with a blend of new and ancient techniques.
Ingredients from Istanbul and throughout Turkey are carefully sourced and selected, “mostly humble”, not necessarily fancy, but they are interpreted with the utmost respect. At the core of each search lies an understanding of the land, its traditions, and its people.
Located on the roof top floor of the fashionable “The Marmara Pera” hotel, “Mikla is urban, sleek and stylish. The restaurant is funky retro with chrome 70’s and 50’s furniture and a stunning wooden rail-sleepers bar.” The magical views over the city stretch to the Hagia Sophia and the Topkapi Palace where you almost travel back through time to the heart of the Old Istanbul.

Mikla has been on The Worlds 50 Best Restaurant list since 2015. 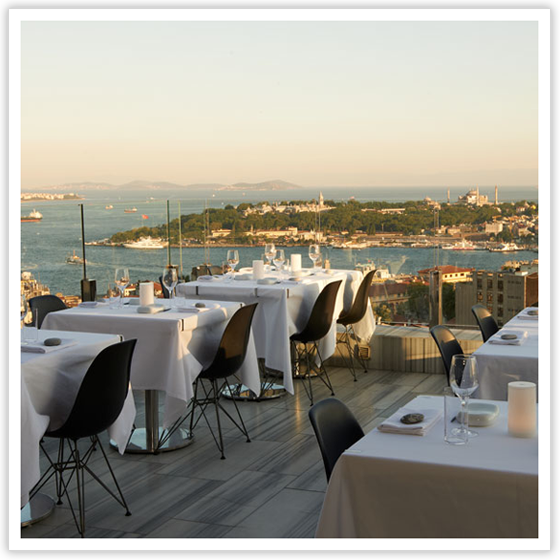